Cycling in a Dream 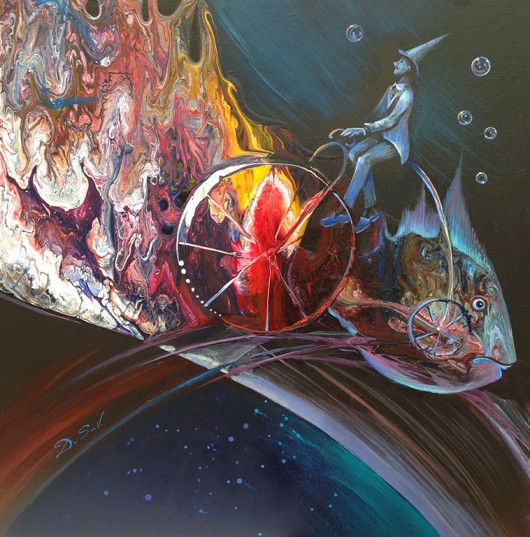 The French art critic and writer Guillaume Apollinaire coined the term surrealism in March 1917. Some 100 years later artists still find this style that calls for the juxtaposition of uncommon imagery as if in a dream, irresistibly pertinent. It was exactly in 2017 when Diana’s Cycling in a Dream (pictured here) emerged from her easel. It ushered a new lineage of works with surreal motifs, which now seem to strongly resonate with the strange surrealism of our global lockdown.

The blurring of dream and reality as in Diana’s painting becomes the symbol of our surreal culture suspended in quarantine, as much as the penny-farthing (the pre-cursor of the modern bicycle recurring in Diana’s work) became a symbol of the late Victorian era. As we are facing the uncertainty of the post-COVID-19 world, so does the cyclist who is riding into something unresolved and chaotic ahead. Uncertainty, masterfully captured through the accidental power of Diana’s signature acrylic pouring technique. A technique worth another story. Until then. Yours, Iliyana Nedkova.