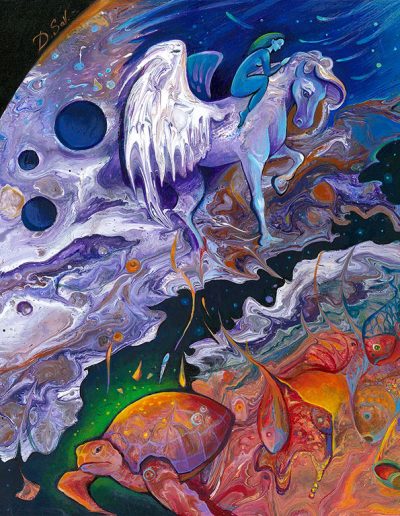 Magic realism is one of the most powerful drives in Diana’s current painting project about contemporary fairy-tale magic. Let’s then go back to the source, to Jorge Luis Borges (1899–1986) – the Argentinian godfather of this literary genre which blends dream and reality. Hopefully, Borges’ Book of Imaginary Beings (1957) would help us roam Diana’s painterly world inhabited by fantastic beasts. Fancy a ride on Diana’s winged horse? Follow the Tiny Rider pictured here. Unsaddled and unbridled, Diana’s Pegasus carries the young rider into the unknown of fairy tales. Our rider becomes an imaginary knight galloping through outer space and Earth’s underwater world.

As Borges compiled and edited his handbook of over 100 strange creatures conceived through time and space by the human imagination, he was aware that such a book is unavoidably incomplete. As if anticipating crowdsourcing, and Wikipedia, in his preface to the 1967 edition of the book, Borges even invited the eventual reader in Colombia or Paraguay to send in ‘the names, accurate description, and most conspicuous traits of their local monsters’.

Diana’s own Pegasus moster would stand as a proud addition. It could exist alongside the Hippogriff – this cross of a horse and a griffon as a symbol of the impossible already included in Borges’ miscellany of imaginary beings. Let’s dip into Borges’ pages and Diana’s gallery at random, just as one plays with the shifting patterns of a kaleidoscope. Yours, Iliyana Nedkova

as part of #artistsupportpledge and #Homeworksresidency